As you walk, bike or drive around the streets of Kaikōura you can’t escape, the towns love for marine life. Not only are there businesses (by air & sea) that take people out to watch whales, swim with dolphins or seals, but there is also many a store that sells memorabilia that celebrates what makes Kaikōura such a sort after holiday destination.

If you look a little closer as you travel about you will also notice that there is many buildings and structures that has marine themed art upon them. Each unique, each worth taking the time explore and enjoy. 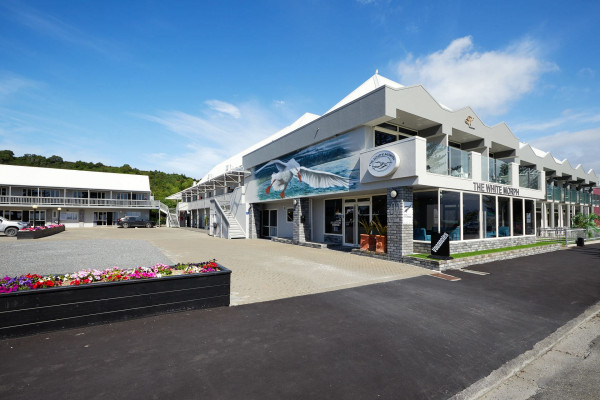 Carpark side of the White Morph Motel along The Esplanade there is the opportunity see a beautiful piece of artwork of a White Morph bird in flight. The White Morph is also known as the Southern Giant Petrel which is the largest of the petrel species, reaching the size of a small albatross. 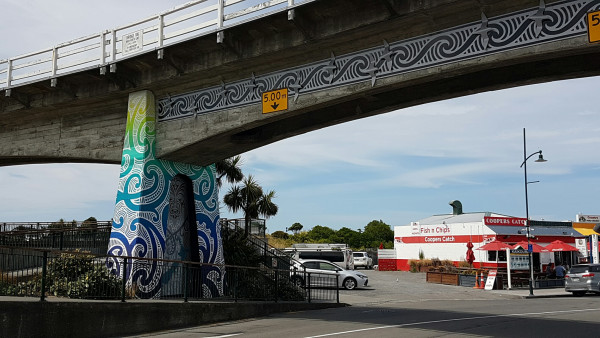 Local artist Brett Pettit is the artist who gave the West End Rail Bridge this amazing makeover. These colourful concepts were designed in collaboration with Te Rūnanga o Kaikōura and NCTIR (North Canterbury Transport Infrastructure & Rebuild) as part of the Cultural Artwork Package you see up and down the Kaikōura Coastline. The pillars tell the story of early settlement in Kaikōura, and forms a symbolic gateway into the town centre. 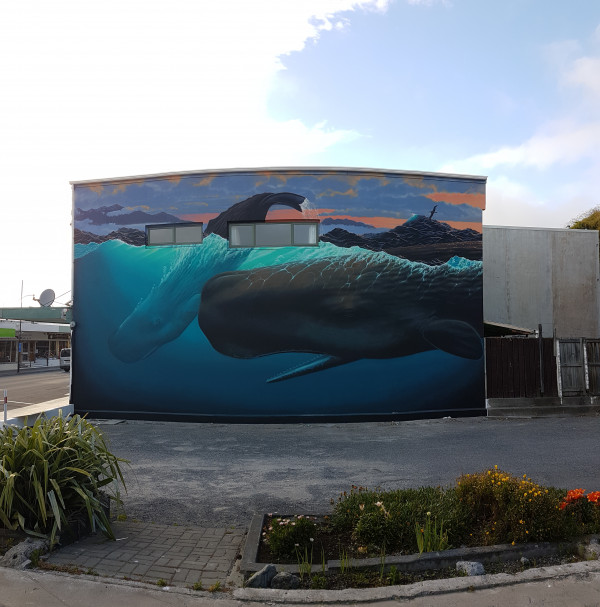 On the side of the old Pot Belly Café beside the Uplift Mall along Westend you see another piece done by local artist Brett Petitt. He did the original artowrk on the side of this building around 20 years ago. As a parting gift NCTIR ((North Canterbury Transport Infrastructure & Rebuild) commissioned Brett to revamp this iconic mural. 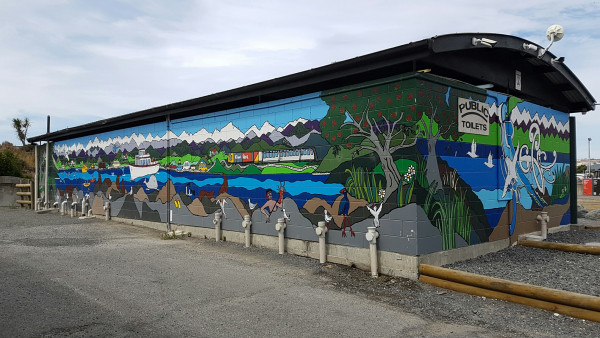 On the side of the public toilets you will see some great artwork that showcases all that makes our town iconic and unique. The mountains, the sea and everything in between. 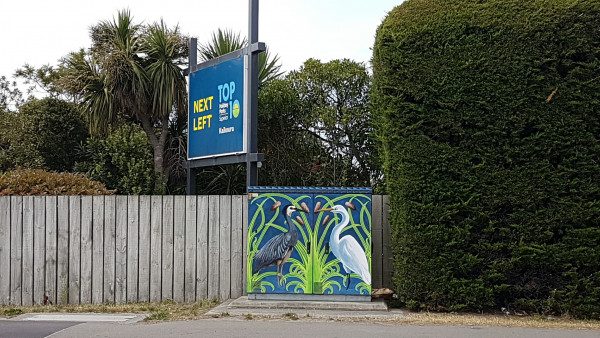 Found on the power box opposite The Dusky Lodge  local artist Mary Ashwell was commissioned by Chorus for this beautiful art piece. Mary describes her mural as: "The white faced heron and kōtuku coming together in Kaikōura. One a local and the other a NZ tourist visiting Kaikōura. A reflection of what has been happening in Kaikōura 2020. 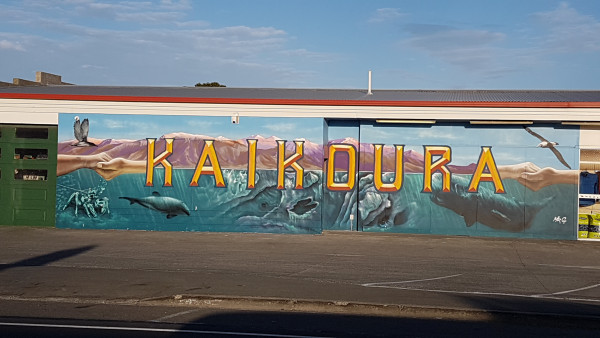 On the outside of the Farmlands building along Beach Road you will see this vibrant Kaikōura themed mural. Artist Graham Hoete, aka Mr G, painted this vibrant 15m mural spread across the side of the building. It's all part of the HeART of the Community project, where Hoete was commissioned to paint a series of locally inspired murals on 15 Farmlands stores across New Zealand. 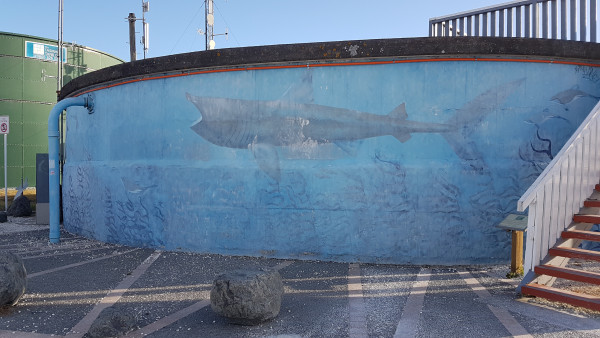 If you head to the town Lookout (off Scarborough Terrace) on the outside of the water tower you will find a basking shark mural which was painted in June 2009 by conservationist and artist Jono More. 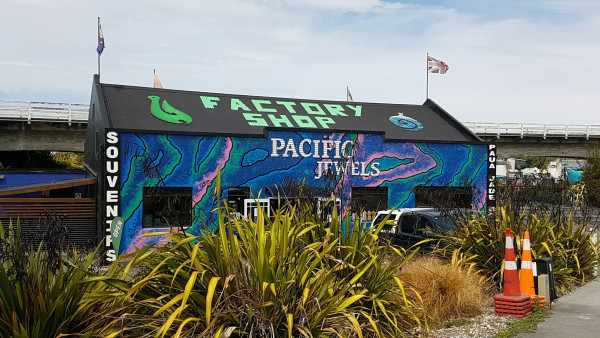 On the outside of Pacific Jewels beginning of Beach Road owner Brian decided he needed to paint his factory and shop building.  He held a competition at the local high school for a mural image.  Local artist Heath Melville created the initial concept.  Larsen's Art n' Signs worked with this concept to create the final drawings and mural. 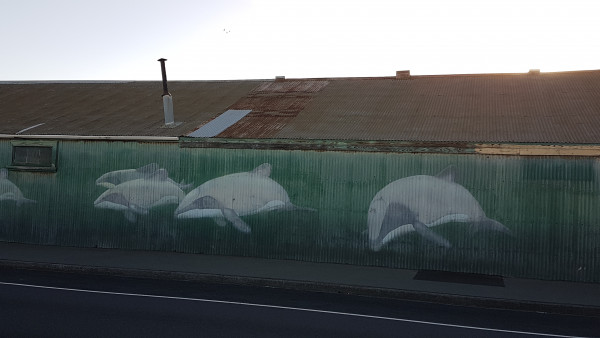 On the outside of the Scout Hall along Beach Road you will see Tutumairekurai or Hector's dolphins. They are unique to New Zealand, and a regular sighting off the Kaikōura coast. Also known as the Mickey Mouse dolphin due to its dorsal being shaped like that of a Mickey Mouse ear. 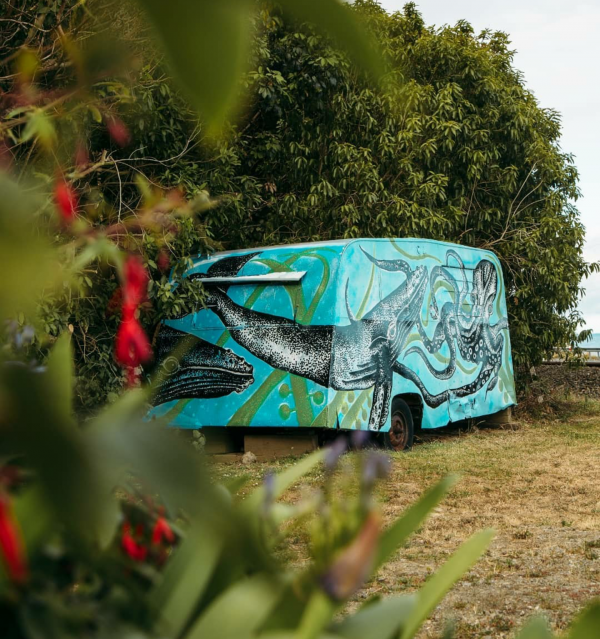 You may even spot on State Highways 1 north of Kaikōura a marine themed caravan this was completed by talented artist Victoria Firth a freelance artist whose artwork is made up of many dots to make something as beautiful as this. You can also spot many other pieces of her art as you travel around Kaikōura. 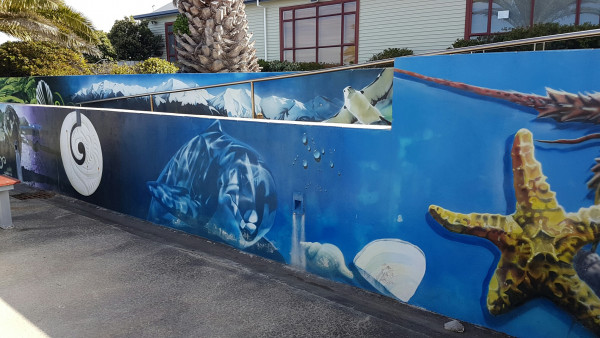 Found along the wall of the outside seating area at Whale Watch Kaikōura you will discover a beautiful mural depicting all that is around us - from the mountains to the sea. 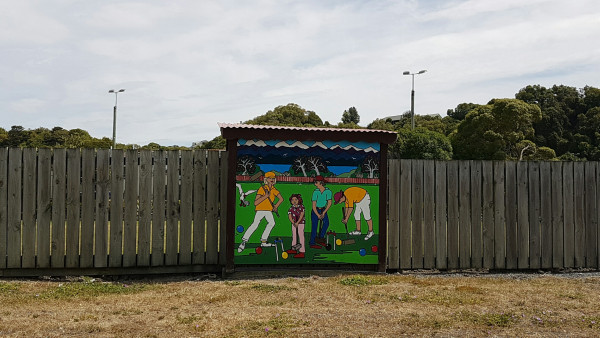 Not quite marine themed but fun all the same. Along the Esplanade next to the Fire Station.